WARNING! “Mexican Pharma” Gets An “F-” Rating: STAY AWAY! 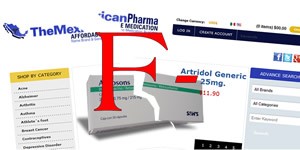 After a long and detailed investigation, we give the Mexican Pharma (themexicanpharma.org) an “F-” Rating, only because it is the lowest rating we can give a company, along with a very rare,  STAY AWAY FROM THIS COMPANY AT ALL COSTS!

One of our U.S. Freedom Network members filed a complaint against the Mexican Pharma when, after a month, he did not get delivery of the medications he ordered, nor a response from the Mexican Pharma, when he asked where his order was. It is important to understand the number of red flags he had encountered during the ordering process. Red flags he ignored as he had been buying his prescriptions from them for over a year. The red flags were as follows:

After a month, and running out of his heart medications, he did file a complaint with the U.S. Watchdogs. Shortly thereafter, he did receive his medications, heart medications that he was now out of, and wrote us of that fact. He asked that we do a follow-up story on the Mexican Pharma as they had told him that his order had been filled in a timely manner and that the problem was in the mail system.

When we contacted the Mexican Pharma to do the follow-up, we were actually quite pleased with their response, believing that they could now accept credit cards. At least that is what they stated to us in their email, and also posted on their website. We also recommended that they post the actual number of days it takes to receive an order from Mexico to the United States, so that clients could plan ahead and not run out of their needed medications. They thought that was a good idea and did post it on their website.

Apparently they thought that was all they needed to get a good review. However, this is an investigative website, not one that they are apparently used to dealing with. We asked our member, the one who had filed the complaint, to go through the ordering process from them to test their payment claims.

When trying to purchase an order, it was found that the Mexican Pharma had out and out lied, both to us, and on their website. They could not accept credit cards and their clients still have to pay either by PayPal “Send Money” or Wells Fargo “ePayments”, which leave their clients totally without recourse. For all intents and purpose, these payment methods are like sending the Mexican Pharma cash through the mail.

As a result, we did our follow-up story and gave them a “D” rating. We also gave them a chance to either change the claim that they accepted credit cards and state the truth, or get a credit card processor that would accept them as a client. They did not change their claim, instead they enticed unaware buyers to go to the next phase in paying them. It also begs the question of what caused them to loose the ability to accept credit cards from a legitimate processing company in the first place?

Let’s face it, they are asking for payments via PayPal. Paypal offers credit card processing as well as PayPal payments to qualified merchants. The fact that they are not using Paypal’s credit card payment method pretty much sums it up about the Mexican Pharma for us, what about you?

As for the person who filed the original complaint and asked us to do a follow-up story to show an improved Mexican Pharma, he was deleted from the Mexican Pharma’s database!

Instead of the Mexican Pharma simply stating that they only accept ePayments, they deleted the complaining client so that he could no longer order medications from them. We think this may have been done, at least in part, so that neither he nor us could see their ordering process where we caught them in a series of out and out lies.

Note: The Mexican Pharma claimed that they did not shut down our member’s account. We have tried to access his account as well as having their website send us new passwords 3 separate times. We tried the new passwords and continued to receive the error message: “email or password not on file”. They have also received at least 3 emails where they could have easily corrected this, if it were not a deliberate action by them. Our opinion is that this is just another lie we caught them in. They have shown time and time again that they make statements that they just don’t expect to have checked, or worse, don’t care.

In Conclusion: the Mexican Pharma gets a “F-” Rating,  only because it is the lowest rating we can give a company, along with a very rare,  STAY AWAY FROM THIS COMPANY AT ALL COSTS!