Millions of dollars and hundreds of jobs lost on Massachusetts’ Great Lie. 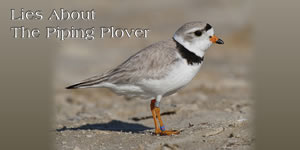 Lost jobs due to Piping Plover

In a time when jobs are dwindling in Massachusetts, we have killed many of the few jobs that remain and we have detrimentally affected tourism throughout Cape Towns, costing our small businesses thousands of dollars, not to mention much needed tax revenues. We closed our public beaches to people, closed roads and God knows what else, for a shore bird that the MA authorities claimed for years was on the national endangered species list. The plain and simple fact is, they lied. Don’t take our word for it, check out the U.S. Fish and Wildlife Agency webpage on the Piping Plover for yourselves at: http://ecos.fws.gov/speciesProfile/profile/speciesProfile.action?spcode=B079

“Since we began this story the Piping Plover page has been consistently moved and seems to magically disappear from time to time. When we started this story, we feared this might happen, so we took snapshots of all of the pages. If the above link doesn’t work please see the original page.

Our interest in this protected bird all came about one day while walking our dogs on South Cape Beach in Mashpee, MA. We were well below the high water mark when we were approached and asked to leave the beach by the director of the Waquoit Bay Reserve, Ms. Leschen, because we were disturbing the Piping Plover. When I asked by whose authority did we have to leave the beach, she said it was by Federal Law concerning endangered species. We complied with the order but decided to do some research into this “endangered” bird. We uncovered what has to be the biggest political lie in the state’s history. And for Massachusetts, that would have to be a whopper!

Our research found that the Piping Plover is not and never has been an endangered species anywhere in New England.  Closing down our roads, our beaches and disregarding people’s livelihoods to protect an “endangered” Piping Plover, is all a giant lie.

The federal agency that handles whether a species is endangered or threatened is the U.S. Fish and Wildlife Agency. A snapshot of the elusive species profile page on the Piping Plover can be found here: http://www.newatchdogs.com/images/USFishWildlife_PipingPlover.jpg. It clearly states that the Piping Plover is not endangered in Massachusetts. It is only considered an endangered species in the Great Lakes Region. It is considered a threatened species here in Massachusetts. While it sounds like a small difference, it is a major one as it applies to Federal Regulations, Laws and the facts on how well the Piping Plover is actually doing.

The misuse of power by the few over the many?  While, the Piping Plover is clearly not an endangered species here in Massachusetts, Ms. Leschen pointed out that there are three nests on South Cape Beach, all in the same area and cited Federal Endangered Species Law as the reason we had to take our dogs and get off the beach. Now, let’s assume for the sake of argument, that it magically became an endangered species here in Massachusetts, as she claimed. Federal Endangered Species Guidelines require that a 50 meter area be kept clear from dogs and vehicles, as well as being fenced in. 50 meters are recommended in the federal guidelines, but the entire South Cape Beach was shut off from dogs, approximately 1200 meters, not the recommended 50 meters. That’s 24 times the recommended Federal Guideline. The questions are, on whose authority was this was done, and for what purpose?

Or just pure incompetence? These same Federal Endangered Species Guidelines state that the Southeast Region Department of Conservation and Recreation, as the caretaker of the area, should have a fence up around the 50 meter area and signs stating that the Piping Plover is nesting there as well as posting “No Dogs or Vehicles Allowed” signs. Where are they?

Here’s our theory on how this whole Piping Plover debacle got started: someone wanted to keep the public from walking on the beach or dunes in front of their house. This is Massachusetts, they went to their local politician and they decided to use the Piping Plover as a pawn to keep these people away. Of course, the eco-fanatics got wind of a bird being endangered and they jumped on the bandwagon, and this whole massive lie, that the Piping Plover is endangered in Massachusetts, is now stated as fact.

Whatever the reason this lie was started, the fact remains that it has negatively affected many people’s livelihoods in an economy that can’t afford this. And it is becoming clearer, the more we dig into this, that these actions are being forced on the public without any basis in law or even any basic demonstrable action that will truly help the Piping Plover. It appears this is purely politically motivated.

We are certainly not Anti Piping Plover, and are, in fact, supporters of common sense solutions, but how about using a little old fashioned New England common sense here. For us humans and even dogs, what is happening here in New England is thought of, and may be, a crime against its citizens, and that isn’t going to drum up much support for this controversial little shore bird. The recent appearances of numerous bumper stickers with slogans like “Piping Plover, Tastes Like Chicken” might actually decline when people’s livelihoods aren’t determinedly affected by overzealous state employees and regulations.

I’m 5th generation born and raised in Falmouth, MA. My family camped on Washburn’s Island, my Dad scalloped in Waquoit Bay in the middle of winter to buy my Mom appliances for our home. We’ve used, respected and protected the beaches around Falmouth for generations. It breaks my heart to see the United States of my ancestors, the land of the free and the home of the brave, become the land of eroding personal freedoms and timidity in the face of “authority”. It’s time to take a stand.

Reprinted with permission from newatchdogs.com