Christopher J. Muse & Shirley R. Lewis are shining of examples of why the election of Judges is long overdue.

When an Impeachment effort by thousands of citizens rages for over two years, complete with the flying of banners over the Court stating, “Impeach Judge Shirley R. Lewis”, turning the Massachusetts Court System into a complete embarrassment, and when Attorneys lodge their complaints against a sitting Judge Christopher J. Muse, with the common theme, “Absolutely the worst judge I have been in front of”, maybe it’s time judges were elected, not appointed. 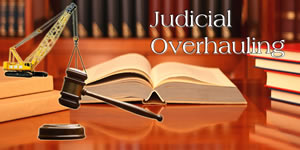 This should be true even at the level of the United States Supreme Court, as evidenced by when Justice Roberts turned his back on the Constitution by upholding Obamacare in an attempt to restore the credibility of the High Court. The plain fact is, Americans don’t trust their elected officials much less their appointed ones like Christopher J. Muse.

At least we can fire our politicians on their election year. We’re stuck with judges until their death or retirement. Our Constitution does provide us with a mechanism to remove a bad judge or politician, called “Impeachment”. The Massachusetts’ State Constitution goes further, specifically allowing its citizens to “instruct their representatives” to take actions such as an Impeachment hearing of judges and other politicians. The effectiveness of this action was made abundantly clear during the massive effort put out by so many of its citizens to “Impeach Massachusetts Judge Shirley R. Lewis”.

Even that effort could not, on its own, bring a Judge before the legislature for a hearing of Impeachment, even though it stayed a front page news story with regional and national coverage on radio and television for two years. It is rumored that only a tape of incriminating conversations with members of the State’s highest Court, forced Judge Lewis into retirement, allegedly preventing both the charges against Judge Lewis, and the content of the tapes from being publicly heard.

It appears that history is once again repeating itself as more and more stories appear every day on corruption in our Courts by unfit Judges. Obviously the Bar Association, in which Judges are members, is trying to discredit the election of judges by putting money into articles that show that “corporations” are buying elections, yet the facts are that Unions donate many times more in the election of officials. This is just another capitalist v. socialist argument to take power from the people and keep it.

One thing to be concidered

Let’s face it, we can’t do a worse job than our politicians. Check out the great stories about government abuses at our sister blog obamamuscles.com.

Not a day goes by without reports of how the President himself lied. Some Judges are honorable men and woman, who we believe truly want to serve the causes of justice and our laws. However, there seems to be an ever growing number of Judges that believe, similar to President Obama, that they are anointed.

The once sacred Impeachment Process is no longer useful since partisan politics will prevail in preventing a two thirds majority in the Senate, required to actually remove a Judge .

The plain and simple fact is, we now have a fox with rabies guarding the hen house.  We allow judges to police judges and politicians to police politicians. Then there’s the  Bar Association where we allow lawyers to police other lawyers, which means to say, not to protect “we the people”, but to protect lawyers’ income. The irony there is that the Bar Association’s membership includes judges and most of our politicians. In fact, there is nothing in our Constitution referencing “Attorneys”. Our sixth Amendment guarantees the right to the assistance of counsel. At that time, “lawyers” became such by “reading the law” and apprenticeship. The Bar Association was not founded until August 21, 1878.

We need to start producing more innovators instead of those that make their living from the blood, sweat and tears of others. Because of this, our country is falling behind in what was once a dramatic lead in the world of technology.

We have a President who appears to want us to become more European when it suits him, yet won’t adopt what most European companies have adopted: loser pays. It stopped the majority of frivolous lawsuits from ever being filed, and would also lower insurance premiums, including medical insurance.

In future stories, we will talk more about “Loser Pays” as well as “Tort Reforms”, which will begin to turn our country’s current mentality of “paper pushers” into real achievers.