Is Christopher J. Muse a Bad Judge? See what Attorneys and Pro Se Litigants are openly posting about him.

While this story will certainly point out the numerous complaints posted about Judge Christopher J. Muse that we uncovered during our research, what really stood out to us, was that we could not find one positive posting about Judge Muse, so we searched again; to no avail. 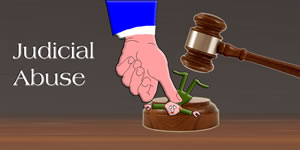 Judge Christopher J. Muse has had complaints filed against him with the Massachusetts Judicial Conduct Commission that included bias allegations against Pro Se Litigants, he was overturned by the Massachusetts Court of Appeals in an Appeal that contained specific charges of bias against the Pro Se Litigants by Judge Muse, along with specific links to his statements that certainly appear to us as biased. See full transcripts and all related Court documents at plaintiff.jetiii.com. Here’s an example:

How would you like to be Pro Se in front of this Judge?

Here’s a few excerpts from comments about Judge Christopher J. Muse from “The Robing Room” that were made by individuals listed as Attorneys. On the day this article was posted, there was not one positive comment about Judge Muse by Attorneys, nor any individual whatsoever in the Robing Room. In fact, we could not find any positive comments on Judge Muse when we performed our extensive search. An appointment like this appears to be a very good reason to campaign for the election of Judges.

#MA321: The worst judge that I have ever been in front of. He lacks professionalism as well as a good temperament. He is also extremely rude, abrasive, and hostile. He is unfair and biased, and does not wish to be challenged.

MA67: Absolutely the worst judge I have been in front of. Asks a question and cuts you off after one sentence of answering. Would rather hear himself speak than hear an explanation. Is condescending, favors older attorneys at the expense of younger ones, quotes nonsensical passages of gibberish to make himself sound smarter.

#MA112: If you have a dog of a case, pray for this judge. He seems ignorant of the law, but decides upon his own strange criteria. The WORST judge I have had the misfortune to come before.

#MA196:  I don’t understand why he is on the bench – every ruling in which I have been involved is a head scratcher.

Be sure to checkout our story about the war cry of thousands of Massachusetts Citizens: “Impeach Judge Shirley R. Lewis” that echoed from the front pages of news papers, radio and television stations across the Commonwealth and the Nation. Thousands of demonstrators on the steps of Massachusetts Courthouses, and even in the halls of the statehouse. Related stories are available in our coverage of the  case of Torres v. Torres, on how the Impeachment lives on. This is the only known citizen Impeachment effort in U.S. history that led to the removal of the Judge.

The antics and comments of Judge Christopher J. Muse are believed to have been so bad, that it is hard not to believe that they were not turned over to the Plaintiffs as they themselves ordered, asthey were just to embarrassing to the Court?

This bears repeating, even though the court ordered that the tapes and transcripts of the hearings in the case of Torres v. Torres be turned over to the Plaintiffs, the Massachusetts Court ignored its own order and refused multiple requests for the hearing tapes. It would be impossible for us not to conclude, that the tapes showed behavior by Judge Muse that would have significantly embarrassed the Court. Why else would they not have provided the tapes?

The appointment of Judge Christopher J Muse appears to be a very good reason to campaign for the election of Judges. We can do it better.

You just can’t make this stuff up!

Even family members wouldn’t want to be Pro Se against Judge Christopher Muse:

THE COURT: My family life is irrelevant. My judge and law life is very important… – [Transcript C, Pg. 7, 4-5]

If you don’t think it’s about the money for his “brothers” and “sisters”, look at Judge Christopher J. Muse lecturing a Pro Se Litigant for using Quicken WillMaker to help his mother write a Will:

THE COURT: What do you think lawyers do? We run keyboards and then we look at it and fill in the blanks and then we say this is a good will for you, and you get the money from the client. – [Transcript C, Pg. 8, 6-9]

When our Federal Courts can’t or won’t address charges of Civil Rights Violations because of Judicial Immunity, it’s time to take matters into our own hands. We must stop the arcane practice of allowing Governors and a President handing out political favors know as Judgeships.

We must provide a means for us to remove a Judge. Weather you are for the Election of Judges or the Modified Missouri Plan proposed by the only citizen who successfully led an Impeachment Effort, one that actually got the Judge removed. You need to get involved.

We have to get back to what made this country, once the greatest nation on earth. We must return to a nation of creators that produce scientists and engineers who will create and build us back to the strongest economic power in history. We must legislate “Loser Pays”

We need to stop what is the greatest threat to all Americans, the self-perpetuating and ever expanding universe of frivolous lawsuits. An old adage expressed as only Mark Twain could: