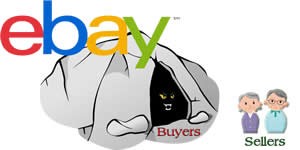 This is part 2 in our series (please see part 1) on what appears to be the unexpected, or more likely, well-known, side-effects of eBay’s new “Money Back Guarantee” which we believe after a detailed review, eBay created  solely to line their own pockets. eBay has effectively created two classes, sellers and buyers, which exhibit differences not unlike those between serfs and lords of old, where the buyers or “lords” enjoy all the rights while the sellers or “serfs” have none. But while this division in classes between serfs and lords was legal in old England, here in the United States, it’s unconstitutional.

And worse, this unconstitutional favoring of buyers over sellers has created an environment where those of us who use eBay as an eGarageSale have become targets of these eBay predators/buyers. These eBay predators know that since they are protected by eBay’s Money Back Guarantee, they can do whatever they wish with the item they bought, like for example, drop it, take parts out of it, break it, etc., then claim it doesn’t work as described and ship it back. 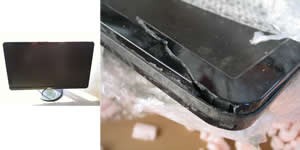 Then, even if the seller has iron clad proof such as the seller in this story,  and opts to not refund the buyer, eBay steps in and fully refunds the buyer. Although eBay states that if the item is not returned in the same condition in which it was shipped out to the buyer, the seller is protected, this is a bald-faced lie and the buyers/predators know it. These eBay created predators posing as buyers, are free to destroy or strip an item and still get their money back from the seller.

Now if eBay wanted to foot the bill of the returned items, we would not be publishing this story. However, the little known truth is that eBay doesn’t pay for this, unknowing sellers do. eBay, without permission, yanks the money right out of your account. While we believe this is clearly illegal, many more say it rises to a criminal conspiracy that meets the bar for criminal and civil R.I.C.O. (Racketeering) charges.

As a case in point, we’ll look at the experience of one of our usfreedomnetwork members. He is a senior citizen who retired early after having heart failure. He is also a senior computer scientist with almost 4o years’ experience. He and his wife bought a motor home and are getting ready to take off on a lifetime dream of touring North America. He didn’t want his development machines, computers he had built from scratch, to go into storage so he decided to sell them on eBay to people who could use them. With everything he has sold, people have come back with glowing reports as happy buyers. Then, he gets two offers within an hour of each other for his monitor.

Seller’s monitor before shipment to Ward

The first offer from Huntsville, AL and the second offer, more locally, from California. Trying to be fair, he awards the monitor to the first buyer. This proved to be a drastic mistake. Unbeknownst to our eBay seller, the buyer was alleged predator William T. Ward, Jr. of Huntsville, Alabama, known on eBay as bill256.

Ward’s photo of the monitor he received

Mr. Ward, upon receipt of the monitor, claimed that the monitor had pixel damage. Our seller, knowing the monitor is fine, now starts to have suspicions about this buyer. He then asked Mr. Ward to send him photos of the

shipping box and the monitor itself since its shipping was insured. He also asked to show another monitor plugged in to the same computer to rule out a bad video card. Mr. Ward was quick to point out that he is an IT professional and lists all of the steps he has taken to care for the monitor then accuses the seller of selling him a bad monitor. At this point, the buyer doesn’t know that he’s dealing with a Senior Computer Scientist. Our seller now had the photos he wanted, sent directly from William T. Ward, Jr. himself, showing the undamaged shipping box and undamaged monitor. Just a few pixels that suddenly stopped working between California and Alabama. Also evident, and later admitted to by Ward, was that he had an identical monitor.

Ward’s photo of his identical monitor on left

He had even taken pictures of it when showing the “other” monitor plugged in to the “video card”.

While our seller was understandably angry of being falsely accused, his wife convinced him to forget about it and get going on their trip. So our seller reluctantly communicated to Ward that he would give him the monitor free of charge but Ward would pay the freight. Ward refused his offer, stating that the seller would also be paying the return freight, and he was not going to pay a penny because, after all, he was an IT guy of 15 years and eBay’s “Money Back Guarantee” would protect him.

It appears to us that Ward was once again attempting to intimidate our senior citizen seller, claiming that the seller had sold him a bad monitor. However, something else Ward didn’t know was that the computer to which the monitor originally was attached had been sold locally to a woman who had bought it for her son. Before disconnecting the monitor to prepare it for shipment, the local woman saw the monitor in action and in perfect working condition and wanted to buy it as well. The Seller explained that it had already been sold. She was present while the seller carefully packed the monitor for shipment to William T. Ward, Jr. in Huntsville, Alabama. After hearing about Mr. Ward’s claim of pixels not working, she offered to write an affidavit testifying to the perfect state of the monitor as well as the care that was taken in packing it by the seller.

Why would a monitor in perfect working condition before being shipped to the buyer suddenly have problems when it arrived? As evidenced by the buyer’s own photos, there was no physical damage to the monitor or the box in which it was shipped. Why did Ward want another monitor when he already had the same one and why did he want it shipped Priority? How many of our readers think that Ward wanted the monitor from the seller for parts for his old monitor?

Things got heated when our seller, not quite ready to be intimidated, took a stand and said no, he would not refund the money AND pay for the freight back. Ward, apparently, has never before been told, “no”. Our seller stated in his emails to him that Ward was acting like a child throwing a tantrum. After reading the emails we agree. Ward continually referred to eBay’s Return Policy like the big brother he was going to get to beat up the seller, while never answering any direct questions. It was left to the buyer to ship the monitor back to the seller. The seller, according to eBay, was to inspect the monitor to be sure that it was in the same condition in which it had been shipped. According to the seller’s photos, it was decidedly NOT in the same condition.

The shipping box had been completely crushed as there was little packing material in the box.

When the box was opened, and the popped bubble wrap removed from the lower right corner, it was undeniable that the monitor had been pried opened. Further, the entire left corner was crushed and a piece of plastic was missing from that corner. All of this was extremely well documented with photos which are displayed here.

The strongest evidence that the destruction of the monitor happened while in Ward’s possession and not during return shipment, is that the missing corner piece wasn’t in the box. Ward’s pictures and own documents show no physical damage upon receipt of the monitor. This was crystal clear proof that apparently in a fit of rage or pure clumsiness, the monitor was damaged while in the care and control of William T. Ward, Jr. of Huntsville, Alabama.

Is it possible that the damage to the monitor and the poor return packaging, which virtually guaranteed shipping damage, or at least the appearance of shipping damage, was to cover up the fact that Ward had opened the monitor to allegedly retrieve parts for his existing monitor? You be the judge.

What kind of person would sell his reputation for $132? Is Mr. Ward guilty of this? Mr. Ward (bill256) has been given multiple opportunities to answer our questions about the allegations made against him, but has never responded. While it may never be known if William T. Ward, Jr. of Huntsville, Alabama did everything the evidence points to, why won’t he deny the charges against him? While we believe that everyone is innocent until proven guilty, after reviewing Ward’s posts on eBay concerning this matter, the pictures he provided, the independent affidavit and the copious photos taken when the monitor was returned, we can certainly understand why William T. Ward, Jr. of Huntsville, Alabama did not want to respond. Even with Big Bully Brother eBay’s money back guarantee to protect him at all costs, why wouldn’t any innocent man not want to tell his side of the story? Or was it that his own pictures, his own documents and the evidence provided by the seller so clear, that he can offer no story that anyone would possibly believe?

Here are some additional pictures and documents for your purview. Be fair and review the pictures, the correspondence and the affidavit, paying particular attention to the timeline. We’re putting up a voting poll shortly so jurors of the world, cast your vote. Is William (Bill) T. Ward, Jr. of Huntsville, Alabama, eBay’s bill256, guilty as charged or innocent of the charges?