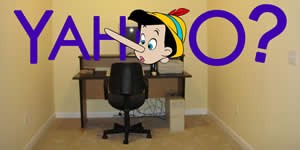 Living by lies? Even when the video, the witness reports and the facts are unquestionable, the Left, like Yahoo, will just make up whatever suits their purpose.

We grew to expect that the “parents’ basement dwellers”, the ones who can’t or don’t want to find a real job, spewed out their rhetoric on the computers their parents bought for them. We understand that we have come a long way from when 15 year olds fought the revolution that turned us into the greatest nation on earth, to the generation of wimps we have today. What is scarier is that the last generation of these know-nothing, do-nothing wimps are running major propaganda websites like Yahoo. I guess words typed on a keyboard rather than written on paper don’t have to be anything more than someone’s fantasy. Well, Yahoo and other Left Wing propaganda agencies like MSNBC got what they wanted, to trash a real journalist by ignoring what he really said. The worst part of all, they know what they did, they know that the majority of their readers will only read their headlines and never know or care about the facts. In my youth I was embarrassed by the actions of Joseph McCarthy black-listing accused Hollywood Communists. Now I pray for someone like him to take these liars on today.