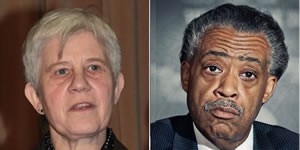 The first thing we need to recognize is that Progressives are cowards and Judge Laura Johnson is one of their rising stars. What is really behind a progressive’s actions is a misguided hope that if they don’t challenge Muslims, Blacks or even bees with stingers, they will be safe and won’t be picked on by the people they fear.

Come on, we all remember these types. They were the kids who hid behind the bleachers when we played dodge ball. It’s funny how a coward’s spots never change. These are the same kids who picked on those from the special-needs class. Today, they pick on Christians and run those they call “their people”. Hustlers like Al Sharpton, or race disciples like Judge Laura Johnson.

Are you as disgusted as I am that the likes of Sharpton, who have the ear of Barack Hussein Obama and N.Y.C. Mayor, Bill de Blasio, are not just cowards, they are communists (by definition)?

What they fail to remember is that Christians have long wielded swords when necessary, and it’s long past due that we once again wield them. When I was young and naive, I tried to avoid conversations about Senator Joseph McCarthy as I thought he was a black eye on the Republican Party. Was I wrong!

While I will admit that McCarthy was a little off-the-wall, his idea was on-point; to not allow celebrities with a complete ignorance of facts, to have undue influence on our society. Just look at Hollywood today, once again striking at the very fiber of our country’s values. It is clear that we need to do something to stop them.

To those of us who love this country, it’s time to take it back. God knows, we can’t depend on the current leaders of the Republican party like cry-boy Boehner.

Let’s start simple. Every time Hollywood tries to shove their latest crap down our throat, all we have to do is stop watching. If some celebrity opens his or her mouth, let’s shut it by boycotting his or her movies. When some TV show decides to have 50% of the cast be black even though the current statistic is that blacks represent 13.2% of the US population, stop watching the show.

I’m sure I will be pegged as a racist for that last remark, but so be it. I know I wasn’t a racist, at least until Obama/Holder came into power, and I don’t believe I am now, but I am a realist. I have no problem with Blacks being in any show or movie cast. What bothers me is to have some loud mouth from Hollywood trying to shove his or her beliefs down my throat by showing blacks in disproportionate numbers. I was a fan of the likes of Denzel Washington, Dianna Ross, Michel Jackson, Motown music and shows like Sanford and Son, but I’m a fan because of their talent, not the color of their skin.

Obama and Holder have fulfilled the quoted dream of a few slaves:

“Slaves dream not of freedom, but of becoming masters.”

“they will not be judged by the color of their skin, but by the content of their character”

If you’re like the vast majority of us, (the ones who loved dodge ball and tried with all our might to win a blue ribbon), we are on the side of Dr. King, not King Obama.

What we have to realize is that it is us who pay the bills in Hollywood by going to movies and watching TV. It’s long past the time to fight fire with fire.

We will be setting up centralized websites to begin boycotts. And, Fox News, one of the few conservative bastions, probably won’t like it, as it affects sponsors and therefore potential profits.  However, look at what the Progressives have achieved with boycotts.

We will, with your help, be getting a list of the shows that are obvious violators of being “Fair and Balanced”  and a list of their sponsors, local and national.  We will then send a letter to the sponsors and specifically set forth our complaints along with a time frame where, if it doesn’t stop, we will stop buying their products. With your support, this “in your face” attitude can be stopped.

Be watching for our stories and action websites coming in the very near future.

Join the Judicial Reform movement. We have found only one citizen impeachment organization that was successful at getting a Judge removed from the very Court where she was the managing Judge and ultimately, in her no longer being a judge. The person who formed the Committee to Impeach Judge Shirley R. Lewis, is a senior adviser to the aforementioned Judicial Reform movement. Please see our Judicial Reform Articles for what can be done to eliminate out-of-control Judges like Laura Johnson.