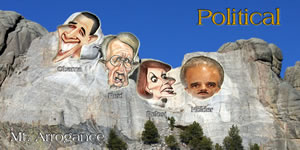 We have watched what happened at the Bundy Ranch with eyes wide with amazement. While liberals and conservatives will forever argue if this was about Bundy not paying his fees or an overzealous Federal Government, the real story is that an armed militia, once only talked about in whispers, was fully embraced by armed cowboys and the community, against armed forces from a government agency.

Reprinted with permission from newatchdogs.com.

Though you would expect that CBS, ABC, CNN and NBC would downplay this, even Fox News has been surprisingly taciturn about the magnitude of this breathtaking event.

No matter if you’re a Progressive or Conservative, this should scare the hell out of all of us, so I will say it again: armed militia were welcomed by hard working, tax paying, salt of the earth Americans to take up arms against armed Government agents.

What scares me the most, having been a part of the civil rights movement of the 60’s, is that as much as I detest violence, I’m afraid of which side I would join if push came to shove. And I am not alone in this thought.

Judge Joseph Johnston is just a small player in all of this, but he is part of the flames that cause the pot to boil for many Americans when he abused the power of his office. And as Obama, et al. have brought racism in America to the highest level of Civil unrest this country has seen since Martin Luther King was shot, the pot continues to boil.

Now before you Progressives start shouting I’m just another radical conservative, consider that Judge Joseph Johnston was appointed by a very rare Republican Governor in Massachusetts. Perhaps it’s not just politics as usual. Perhaps the entire mindset of a nation has fundamentally shifted, and those of us old enough to remember Martin Luther King and not his antithesis like Al Sharpton and Jesse Jackson, are beginning to chafe against the shift.

History repeats itself: Did you ever wonder how Fascism was able to take over Germany and Italy? How McCarthy was able to prosecute a significant portion of Hollywood’s population? It was in reaction to the Communist movement and the fact that its philosophy ruined economies and took away the fundamental rights of the people.

That’s why our Constitution puts in place safeguards so that the newest flavor of public sentiment cannot be forced on those who disagree and why Obama, et al. are trying so desperately to dismantle that Constitution. And most importantly for this story, why our Constitution has an overall theme of protecting the rights of the minority. Our founders both understood and feared exactly what was seen at the Bundy Ranch: armed insurrection by the very backbone of our nation.

WAKE UP FOLKS! Obama tried very hard to get “his” news media to focus on the armed insurrection in the Ukraine, while Russians watched the armed insurrection at Bundy Ranch. The lines are so blurred under Obama between the U.S. and Russia, that you can’t tell the good guys from bad guys any longer. And just a thought, was controlling the news media one of the sparks that inspired the McCarthyism movement against so many in Hollywood?

Eric Holder, The Grand Wizard of Racism: Let’s forget opinion and stick to facts: Black Panthers Intimidate Voters and Eric Holder does nothing. Black youths enjoy the Knockout Game punching unsuspecting whites and Eric Holder says it’s not a hate crime. A Radical Muslim shoots up Fort Hood and Eric Holder says it was workplace violence. The 1st Amendment does not apply as the emails from API and Fox News Reporters are grabbed, by Eric Holder. The list goes on and on.

The only difference between Eric Holder and a KKK Grand Wizard is in the fact that Holder violates far more people, and does so in full view of the populous under Obama’s approving gaze.

Harry Reid, Follow the Money: If there was ever an example of absolute power corrupting absolutely, it is this administration. Any true American is both shocked and sickened by the very thought of Americans once again taking up arms against their brothers, as they did in the Civil War. Why does Harry Reid want to shut up his fellow Nevadians? Does this make you wonder, could it have more to do with the growing wealth of Harry Reid and his family, than about any grazing fees and tortoises? You be the Judge.

A quick look at Harry: Harry never served in the Military, and with the exception of two years while in college (as a Capital rent-a-cop), has always been paid by the taxpayers.

His highest pay is right now, as Senate Majority Leader, $193,400 annually. Yet Harry has a net worth between $3 and $10 million dollars. We won’t even mention how his family’s wealth has sky-rocked since he came into political power.

Harry claims to have been a boxer, but there is no reliable information about Harry’s boxing we could find, anywhere. One progressive website, oh, that’s Harry’s website, says Mike O’Callaghan was his high school mentor, boxing coach and best friend. WikiAnswers however, flatly said NO, he never was a boxer.

This time, Harry Reid was caught red-handed using his influence for the Nevada Solar Project. It is obvious to us that Harry did his best to cover his part up, by having all of the documents removed from the Internet (that takes real power and influence). But Harry got caught, SCGNews.com took a screenshot of undeniable evidence how Harry used his influence and got richer (Reid’s oldest son works for Chinese solar company).

After reading their investigative report and verifying their facts, it left absolutely no doubt with our investigators or this reporter that the Las Vegas Sun was incorrect when they said the 1998 Bank Robbery was the largest theft in Nevada history.

The retrieved document that was authored by the Bureau of Land Management which is run by Harry’s former campaign manager, was summarized by SCGNews.com and states:

“They specifically referred to the solar project as a justification to seize Cliven Bundy’s cattle.”

Do you think it’s a stretch to wonder how much Harry had to do with all of this? It was his former campaign manager Neil Kornze, appointed by, your guess, who is now the head of the Bureau of Land Management. The same bureau that was armed and sent in to take Bundy’s Cattle. See the Washington Times Investigative Report.

But the best of Harry was yet to come. He now says “he’s not going to put up with this lawlessness in Nevada, send in the troops! Yep, another who has never served is ready to send in the troops. Harry is as credible as is his boxing past.

While we admit it is currently impossible to know the true facts about Harry’s past or how he made his wealth, one thing is as true as if written on the Tablets carried by Moses:

Harry Reid will not be in front of the troops he wants to send into harms way, he will be hiding behind the “bleachers” with his Progressive friends. In my day as in my father’s before me, we called such men cowards.

Yet, while all of this demonstrates corruption at the highest levels of our government, we have a long history of corrupt politicians without inspiring armed insurrection. Do not doubt what Bundy Ranch was about. It was about a free people accepting a once outcast armed militia, while arming themselves to protect what they believe to be their most sacred right: to run their own lives.

The Dictionary’s definition of Communism is defined as:

“all economic and social activity is controlled by a totalitarian state dominated by a single and self-perpetuating political party”.

Why won’t even Fox News speak the truth and call Obama what he is, not by our words, but by the very definition of the word itself? Barack Hussein Obama is a Communist, and Eric Holder is his henchman. When you think I am being harsh and off-point, for us older Americans who actually had history books with, well history, we remember that Germany, now one of our closest allies, watched and joined Hitler as he rose to power and surrounded himself with henchmen like Heinrich Himmler, Hermann Goering, Joseph Gobbels, Reinhard Heydreich and Ersnt Rohm. Some of the most notorious criminals in all of history.

We’re not saying that Obama’s Eric Holder, Hilliary Clinton, Harry Reid, Nancy Pelosi and Joe Biden are comparable to Hitler’s Henchmen. We are saying if it were not for people just like them, their countrymen would not have accepted fascism and leaders like Hitler and Mussolini. History is very clear, forcing unjust laws and taking away basic freedoms, is a very dangerous game.

The liberal progressives were most likely those kids in school who hid during gym class when it was time to play  dodge-ball. You remember them hiding behind the bleachers. These same kids are now adults,  and most of them voted for, or even now work for, the Obama Administration. They apparently feel they are meting out “payback” for all those dodge-balls thrown their way.

Bundy Ranch lit a spark. This time even law-abiding citizens didn’t just “do as they were told”, they defied the government with an armed resistance. And don’t think we didn’t notice what the government did when faced with that resistance: they ran away from the fight, just like they ran from dodge-ball. The question now becomes, when push comes to shove, whose side will the majority of Americans be on? Will the military side with Obama et al. after constant cuts to their benefits to fund ObamaCare? It is an historic fact that when people are denied the most fundamental of their freedoms, like a sleeping giant, once awakened, beware his terrible resolve.

The solution? We understand that even Fox News needs revenues from advertisers, that is a fact, and most likely a factor in their downplaying of boycotts. However, let’s take a page from the liberals’ play book because you can’t argue with success. It’s time to boycott products from companies that discriminate against Conservatives and Christian values.

Number one on the list are Hollywood’s movies, movie-makers, television shows and actors. Boycott products that are advertised on ultra-liberal websites and MSNBC. Boycott those who fire conservatives when they express traditional values.

Remember Michael Gorbachev’s words when he recalled his time in office: Ronald Reagan dismantled the U.S.S.R. without firing a shot. Ronald Regan simply bankrupt the U.S.S.R. using a weapon no longer available in our arsenal, the strongest economy in history.

To the chagrin of the liberals, we conservatives and seniors are among the few left with disposable income. All we have to do is cut off the fuel to the Liberals engine: use our money and boycott their sponsors!

To the less significant players like Judge Joseph Johnston who abused the power of his office, keep up the pressure. We need to have more peaceful demonstrations in front of his courthouse and in the streets of his neighborhood. We need more stories delving into his past and his motivations. While Judge Johnston is trying to keep a stiff upper lip, other judges are watching, knowing we are watching them. To the other Judges: when you think you were anointed not appointed, we are standing by with Scarlet Letter in hand.

America, wake up before this country explodes. Justice Tempers Violence in a Free Society. And it’s long past time for Justice. To those who now possess power and eagerly use it,  forcing their views on others,  believing they can crush those who disagree, we leave you with one thought, the image of Mussolini and his mistress hanging in the town square as those they once oppressed spat on them as they marched by. Power is fleeting and often changes hands.